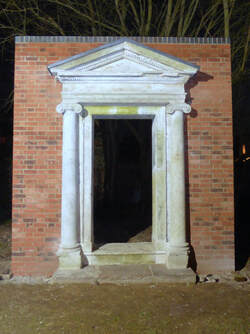 ​Redbourn has its Portico back

On 15th June, Redbourn villagers and guests, including museum patron Sir Simon Bowes-Lyon, celebrated the unveiling of the Redbourn House Portico in the grounds of the local history museum at Silk Mill House on Redbourn Common.
This was the culmination of a 3-year project initiated by Museum Trustees, co-ordinated by Graham Lawrence with architect Charles Milner and wide fundraising support from the village and beyond.
The Portico was originally the doorway of Redbourn House, a grand mansion that once stood in the High Street and was visited by H. M. Queen Elizabeth the Queen Mother as a young girl, as it was owned by the Bowes-Lyon family.
After Redbourn House was demolished in 1955, the doorway was re-erected in St. Albans outside the museum in Hatfield Road, where it remained for over 60 years.
Now it has a new home back in Redbourn, and it looks magnificent.