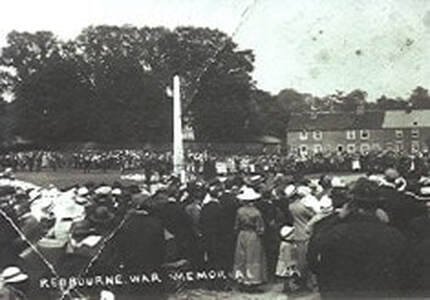 In the atmosphere of emotion and patriotism that prevailed after the end of the First World War, many towns and villages in the country decided to erect a permanent memorial to those who had lost their lives on active duty in the war. Redbourn was no exception. A Redbourn War Memorial Committee was created to facilitate this project, a prominent member being Mr Robert Cecil Peake who lived in Cumberland House. Money was raised, designs were drawn up and permission obtained to locate it on its present site on the common. The final designs were drawn up with the aid of Mr C.T. Alderton, a reputable Monumental Sculptor and Mason in Harpenden. In due course Mr Alderton submitted an estimate for the work of £225, with the "raised lead letters” of the inscription costing an extra one shilling each. The estimate was accepted and a formal agreement made between Mr Alderton and Mr Peake, on behalf of the committee on 13th November, 1919. The monument was to be 20 feet high and both shaft and base were to be made of “Cornish granite”.


​The work, which had to be done to the satisfaction of Mr Henry F Mence, Surveyor of St Albans, was duly completed, and was unveiled' by "the most noble, the Marquis of Salisbury" at a service on June 13th 1920.

Following the end of the Second Word War, 18 additional names were added to the base of the memorial in raised lead letters similar to those of the fifty six from the earlier war. They included that of Nurse Vilvandre, the first woman in the list.


On 20th August 1995 a ceremony was performed at the memorial to mark the 50 anniversary of VJ day, the end of the Second Word War. By this time there was a feeling that the Memorial was looking a bit shabby and needed attention before the ceremony. Radical suggestions such, as surrounding the end corner of the common with metal posts, were rejected by the Parish Council, but the surrounding garden was trimmed and some Peace roses planted. The sunken spotlights were installed and the lead lettering repaired where necessary. Some mistakes in the initial lettering were rectified thus the name Bowden was corrected to Boden, Hoare to Hoar and the name of "R.T. Bozier added. The granite was not cleaned following expert advice. The memorial is the site of the traditional annual Service of Remembrance on the Sunday nearest November 11th. Often such ceremonies were elaborate and involved a parade of parish officials and organisations along the High Street and a service in the Parish Church. Parades in 1949, 1950 and 1951 were recorded on film by Mr Heather. The ceremony lapsed sometime after the Second War; it was revived in the late fifties and continues today with strong ecumenical support.
Besides the inscription on the War Memorial, the war dead are commemorated on two wooden plaques in St Marys church. These plaques give the forenames of some of the fallen and, having been made at different dates, offer slightly different information. Thus, in the list for The First World War they include the name of Cicely Pope. Cicely Mary Legh Pope, V.A.D. was born in Redbourn Vicarage in Nov 1880, presumably a daughter of the Rev. William Alexander Pope who for 10 years was Vicar of this parish. She continued her military-nursing duties in the Voluntary Aid Detachment after the war and died, age 41 in Nish, Serbia, in June 1921; she is buried in the Military Cemetery there.
Another monument in the church (formerly) near the puIpit, reminds us that civilians in Redbourn also lost their lives in the wars. It commemorates Henry Miller, a churchwarden, who died in 1916 as a result of a Zeppelin raid.